Mention quicksand and your mind may conjure a memory of Indiana Jones falling into a pit of it and using his lasso to pull himself out. Quicksand is a powerful metaphor used to illustrate an illusive force dragging you down. The harder you fight to get out of it, the deeper you sink.

I was reading an article by Chip Ingram on depression. I did not read it in depth, just enough to see the staggering statistics. He listed well known church leaders and bible heroes who have suffered from it at one point in their life.

Depression is a heavy, sinking feeling. The forces of life are dragging you down. The more you try to struggle alone, the deeper you sink. You feel hopeless as if you are going to be overtaken by it. 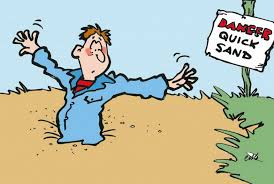 "Together these materials form a structure resembling a house of cards, with large water-filled gaps between the sand particles, which are loosely glued in place by the clay." Naked Scientists

If you fall into quicksand, the jelly liquefies, salt produces electrical charges. The house of cards falls. The mixture essentially goes from jello to a parfait, with the heavier elements compacting at the bottom. Essentially trapping the person.

What keeps you stuck? The lack of knowledge.

I am writing this article to tell you that you cannot drown in quicksand or depression. You have to know that depression happens to a lot of people – successful, God-fearing, good people.

My making small circles with the trapped body parts, you reintroduce the water into the sand and clay. The density is reduced enough so that someone can pull you out.

Read more about quicksand over at the Naked Scientists.